Check Out
Skip to content
May 9, 2018 Jeanie and Lulu's Kitchen 10 Comments

Two of my absolute favorite worlds collided on Saturday, May 5th: the world of Harry Potter and the world of live theatre. A while back, I applied to get an exclusive code for tickets to Harry Potter and The Cursed Child on broadway since it just arrived from London last month. The cast even had almost all of the original London cast main characters reprising their roles here, which was amazing. So the demand for tickets was really high and the first time I applied I was out of luck getting one. Well, second time was a charm and we got one! Marc and I booked tickets as soon as we got the code to see both Parts 1 and 2 on the same day for the first date we could get good seats. I could barely sleep the night before I was so excited since I had seen so many glowing reviews about it. My friends, the reviews don’t do it justice and I don’t think I can either. I’ll try my best though. First of all from a logistical standpoint, you saw that I mentioned Parts 1 and 2. Booking tickets is basically booking 2 broadway shows because the whole script (if you read the script that was released) is broken up into 2 shows that each run 2.5 hours with intermission. I highly recommend doing both parts in the same day if possible. It is a whole day affair then, but it just keeps the continuity so much better. The other option is to see both parts on consecutive evenings. We had about an hour to get dinner between the matinee and evening shows, which was perfect. The restaurants across the street even were prepared for the rush of people!

The mood was set the minute we walked into the lobby. There were Hogwarts paintings and patronuses everywhere setting the magic. The Lyric theatre underwent a huge renovation to accommodate the show and it looked so spectacular. When the curtain came up, I was instantly swept away to J.K. Rowling’s world. The story picked up right where the prologue, 19 years later, of the last book left off. The very beginning is pretty much word for word from that prologue. Harry is now 37, married to Ginny with three kids. It’s the first year at Hogwarts for his middle child Albus Severus. From there, the play follows the adventures and misadventures of Albus as he navigates school, and the pressure of being the son of famous Harry Potter. The emotion and chemistry flowing between Jamie Parker as Harry and Sam Clemmett as Albus is beautiful to witness as they evolve their relationship. The other huge stand out and my personal favorite was Anthony Boyle as Scorpius Malfoy. He is the best friend and close confidant of Albus and son of Harry’s old nemesis Draco. The two become close because they both struggle with their respective family legacies, and their friendship is another beautiful thing to watch. Mr. Boyle brings so much to the role of Scorpius both emotionally and comedically that I forgot he was even acting. He IS Scorpius. 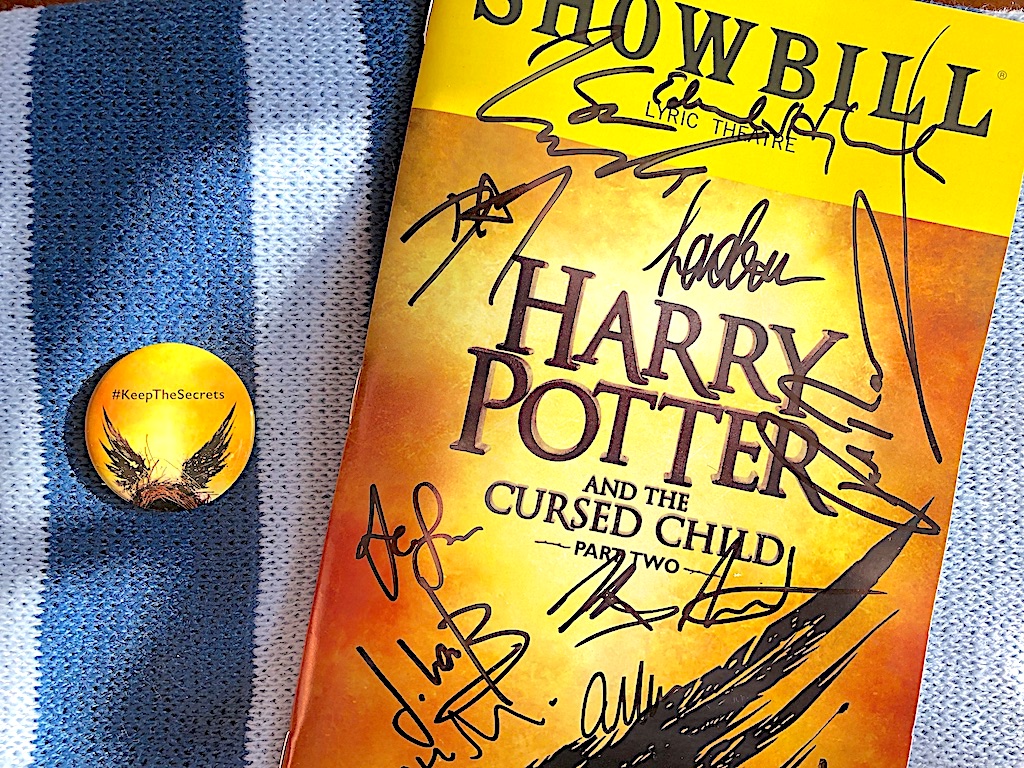 The technical aspects and production value of Harry Potter and The Cursed Child were completely mind blowing as well. The scene changes were as smooth as silk with gorgeous choreography utilizing sweeping cloaks to help cover them. Imogen Heap composed the perfect music to add to whatever the mood of the moment was. There was literal and figurative stage magic happening in every scene that had me wondering “how did they pull that off”?? This wasn’t one of the movies where the magic could be added in with a green screen and computer, it was live. I wasn’t in New York in a theatre. I was in Hogwarts, witnessing the events like a fly on the wall. It was that immersive and transporting. As a huge fan of the books, it was also so incredible seeing a whole lot of the major events in them brought to life on stage. We came home with indelible memories, a Ravenclaw scarf for me, Gryffindor tie for Marc, pins that they gave out and Playbills that most everyone very graciously signed at the stage door. This was a once in a lifetime theatrical experience and there has never been anything like it on Broadway. If you go, get lost in it, enjoy it thoroughly and please always #keepthesecrets. I hope you liked my review, let me know what you think! xoxo

10 thoughts on “Harry Potter and The Cursed Child”

This website uses cookies to improve your experience while you navigate through the website. Out of these cookies, the cookies that are categorized as necessary are stored on your browser as they are essential for the working of basic functionalities of the website. We also use third-party cookies that help us analyze and understand how you use this website. These cookies will be stored in your browser only with your consent. You also have the option to opt-out of these cookies. But opting out of some of these cookies may have an effect on your browsing experience.
Necessary Always Enabled
Necessary cookies are absolutely essential for the website to function properly. This category only includes cookies that ensures basic functionalities and security features of the website. These cookies do not store any personal information.
Non-necessary
Any cookies that may not be particularly necessary for the website to function and is used specifically to collect user personal data via analytics, ads, other embedded contents are termed as non-necessary cookies. It is mandatory to procure user consent prior to running these cookies on your website.
SAVE & ACCEPT